Blinded by the Banks of Bordeaux 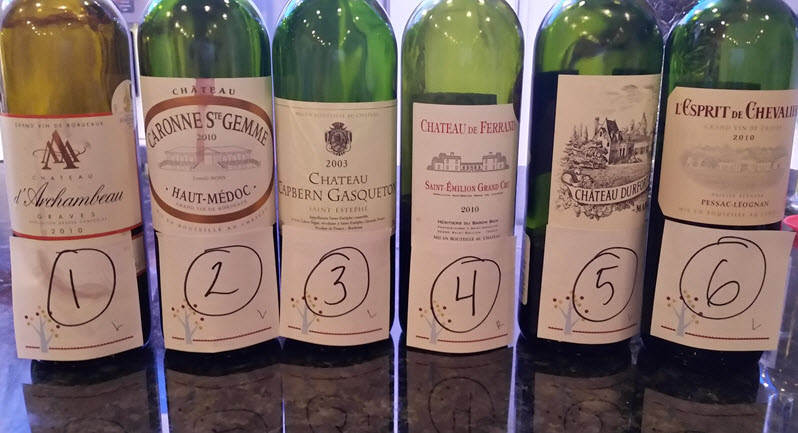 Getting to know French wine is kind of like dating. In the beginning, making the right choice amongst so many options can be paralyzing. There is anxiety, perplexing decisions, and confusion. I mean, let’s face it, the labels alone on French wine practically need a decoder with their hard-to-pronounce names and lack of grape varietal. But with patience and persistence, the early feelings of trepidation turn into delight and familiarity, albeit challenge can still be ever present. That said, our local neighborhood wine groupies decided it was time to have a love affair with French wine.

Because we love powerful, complex red blends, we decided to go on a blind date with sexy Bordeaux. At about six times the size of Napa, Bordeaux is the largest region in France and produces an astounding range of wine fit for any oenephile. And, since France is the largest exporter of wine to the U.S., it’s not exactly hard to find good Bordeaux at any local retailer. So, on a recent Friday night, we gathered to compare and contrast the nuances of the bold and ageworthy reds from this famed region on the Atlantic coastline of southwest France. 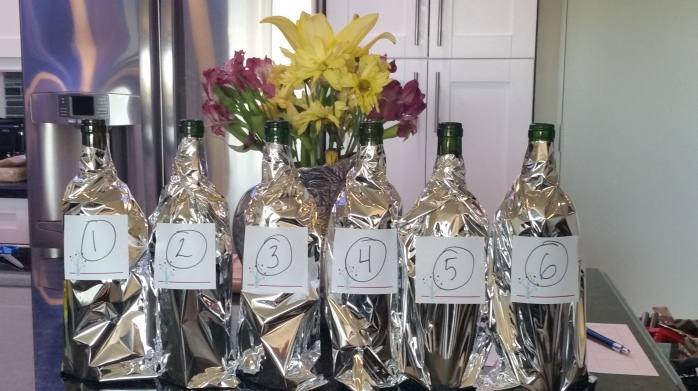 Bordeaux literally means “along the waters,” which aptly describes this region’s water-influenced terrain. The Atlantic Ocean is to the immediate west of Bordeaux, and the region is divided by an estuary, creating the Left and Right Banks, each of which has unique soil characteristics.

The Left Bank, primarily gravel and sand, forces vines to dig deep for water, which is well suited for Cabernet-based blends. The Right Bank is mostly clay, holding moisture and creating a fertile environment ideal for Merlot-based blends. Cab Franc is also an important grape in Bordeaux, particularly the East Bank. It is not uncommon to also find Petit Verdot and Malbec in Bordeaux blends as they are used to contribute color, aromatics, and other enhancing characteristics to the wine.

View the Appellations of Bordeaux

In an effort to truly experience the Bordeaux region, we did our best to select bottles from multiple appellations within each part of Bordeaux and with a varying price point, ranging from $20-45. The goal of the blind tasting was not to create a battle of the Banks but rather to taste and understand the variances without the interference of biases. As it turned out, we ended up with only one bottle from the East Bank, so it ultimately turned into a West Bank tasting with an impostor thrown in! All six of the wines, with exception of one, were from the revered 2010 vintage, which are readily available and, let’s face it, hard to go wrong.

Five of the wines were outstanding and the group was in consensus that just one was a bit meh. That being said, aside from that one exception, we had difficulty ranking them, so I took a swag at it. For the first place spot, it was a standoff between a Cab-based blend from Graves and a Merlot-based blend from Saint Émilion. The least favored wine of the bunch was from the Haut-Médoc region on the Left Bank. Here is the ranking, in order from most to least favored.

Chateau d’Archambeau, 2010, Graves
The Graves region on the Left Bank is particularly known for its gravelly soil, hence its name. This full-bodied beast had dark cherry, leather and tobacco on the nose and a smooth finish with a hint of lingering spice. This one is available at a bargain price of about $20 at specialty wine retailers or online. We got this one at Richard’s Best Cellar in Fort Lauderdale.

Chateau de Ferrand, 2010, Saint Émilion
Located on the Right Bank, the Saint Émilion region is home to the most high-end red wines in the region. This Merlot-based wine (our only Right Bank wine of the night) is rounded out with a bit of Cab Franc and had dark fruit and smoke on the nose with a velvety mouthfeel. It was soft and bold all at the same time! Available for about $40 at Total Wine.

Chateau Durfort-Vivens, 2010, Margaux
Margaux is in the southernmost part of the Haut-Médoc region on the Left Bank. This wine was the most aromatic of the collection we tasted, with a heady, floral nose and cedar and spice on the palate. It had a smooth finish with light tannins. I read somewhere that wine from Margaux is often described as being like an iron fist in a velvet glove. ‘Nuff said. Available for about $45.

Chateau Capbern Gasqueton, 2003, St. Estèphe
Like Margaux, St. Estèphe is also in the Haut-Médoc region but is in the northernmost part. It had lots of dark berry on the nose with warm spice on the palate and good complexity. St. Estèphe produces wines with powerful tannin structures but given this bottle being a 2003, the tannins had softened. Available for about $25 at specialty retailers and online.

L’Esprit de Chevalier, 2010, Pessoc Léognan
Part of the Graves region, Pessoc Léognan is known to have some of the best wines in the region. This one had distinct mineral flavors along with blueberry and tobacco. The finish fell somewhat flat despite having a full aroma and mid palate. Available for about $30 at specialty retailers and online.

Chateau Caronne Ste. Gemme, 2010, Haut-Médoc
The group agreed what made this wine the least favorite of the line up was its short and somewhat bitter finish. It had some tart fruit and a bit of smoke on the nose but the tannins were overwhelming and powerful. This one likely needs more time in the bottle. Available at specialty retailers or online for about $25.

The Lighter Side of Bordeaux

Although Bordeaux is primarily a red wine region, it does produces some stunning whites, too. An interesting factoid: Graves is the only part of Bordeaux where both red and white wines are made by most chateaux.

We had started out our evening with a white from Chateau Calvimont. Made mostly of Sémillon and Sauvignon Blanc, it was a lighter-style white with citrus and mineral flavors. It was well balanced with bright acidity. Available for about $15 at specialty retailers and online.

← Wining and Dining with Sbragia
The Baby Amarone →

Some favorites from #2019
Bubbly ready to be popped to begin the festivities! Happy New Year! #2020 #happynewyear #sparklingwine #holidaycheer #cheers #bubbly #cava
Always love a good #malbec from #washingtonstate. Picked this one up on our last visit to #woodinvillewinecountry. Paired it with a spice-rubbed pork tenderloin. #delish #wineandfoodpairing #saturdaynight #washingtonstatewine #winenight
Celebrating the first night of #hanukkah in our #judeochristian household with an old favorite from @truetthurstwinery. #redroosterwine #zinfandel #drycreek #sonoma #holidaycheer #sundaynight #cheers #celebratelife #holidays #menorah #christmastree
Hands down, one of my favorite Italian wines as of late. Makes for a great #pizzaandwine night. Find it at #costco. #chianti #foodandwine #foodpairing #winepairing #whatsinmyglass #fridaynight #weekendwine
Novelty Hill-Januik is a must-visit winery in #woodinville. Robin made our visit a stellar one and the wines are simply superb. Loving the Washington state wine scene! #woodinvillewinecountry #washingtonstatewine #winery #winetasting #wawine