Wining and Dining with Sbragia

Back in early 2010, my husband and I visited Sbragia Family Vineyards, nestled up in a hillside overlooking the Dry Creek Valley. We were visiting on a beautiful spring afternoon and were in awe of the views and beautiful property. We bought wine that day and even though we consumed it long ago, I still have record of it, thanks to my OCD when it comes to wine tracking. But more on that later. 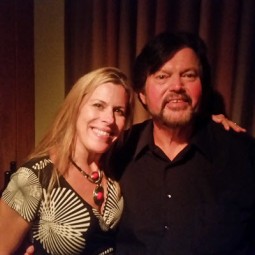 Fast forward more than six years later, and we were seated at a table at Cafe Maxx on the other side of the country in Fort Lauderdale, enjoying a wine and food pairing dinner with Ed Sbragia (at left), the founder of the winery and the third generation of the Sbragia family to make wine in the Dry Creek Valley. Ed’s grandfather came to Healsburg from Tuscany in 1904 and worked at various wineries. Ed’s father acquired his own vineyards near Healdsburg, and Ed worked with him in the family vineyards before embarking on a 32-year career at Beringer. In 2001, Ed began his own Sbragia label and in 2006 he opened the Sbragia Family Vineyards where his son Adam now serves as Winemaker.

The event was hosted by Wine Watch, a specialty boutique wine retailer, and it brought a winning combination of food, wine, and a festive atmosphere to an otherwise oppressive, muggy summer evening.

To start the evening, the 2012 Dry Creek Valley Sauvignon Blanc was paired with pass around appetizers, such as filo purses stuffed with fig and brie, grapefruit creme brulee with foie gras (complete with small bits of caramelized sugar that resembled shimmering gold flecks), and shrimp atop a chunky –yet elegant–melon salsa served in a martini glass. I am always pleased when I’m presented with a Sauvignon Blanc in this style. Unlike many wickedly acidic Sauvignon Blancs, this one was soft, had hints of pineapple and a touch of sweetness to temper the light acidity. I mean, how could this not go well with a decadent filling of triple cream brie and fig encased in a golden, crunchy wrapper? We were off to a great start. 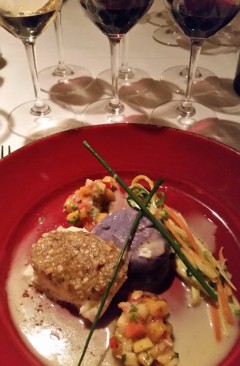 I don’t know about you, but hog snapper isn’t exactly something I typically encounter on a regular basis. It was the first course listed on the menu so I had to research it. Apparently, the hog snapper has a pig-like snout and it roots around on the ocean floor. Despite the amusing mental image of this fish, its fleshy white meat and accompanying purple potato mash were mouth-watering.

This course was paired with the 2013 Home Ranch Chardonnay. With only a light dusting of oak, this chic Chardonnay had tropical fruit flavors and a hint of almond that made the vanilla beurre blanc sauce pop.

Ushering in the Reds

Our next course, BBQ pork ribs, was paired with the 2012 Sbragia Gino’s Dry Creek Valley Zinfandel. What we discovered about the Zin was that we liked it best right out of the bottle. Our first sip, which had been poured into the glass earlier in the evening and given time to breathe, had softened, making the fruit mellow to the point where we almost picked up port-like qualities. However, straight from the bottle, it had the spiciness and brightness I like in a Zin.

Moving onto the three peppercorn and coffee dusted filet mignon with a red wine cherry demi glace, we were treated to two Merlot selections. The 2012 Sbragia Merlot State and Rush was a wine made for Morton’s Steakhouse. The State and Rush featured elegant, rounded fruit with soft tannins. It played well with the tartness of the glace, which created a velvety mouthfeel.

But, when I tried the 2012 Sbragia Home Ranch Merlot Dry Creek Valley, I knew I’d found my match! The Home Ranch was big and boisterous with lots of dark, deep layers that lingered. It could easily fly solo. 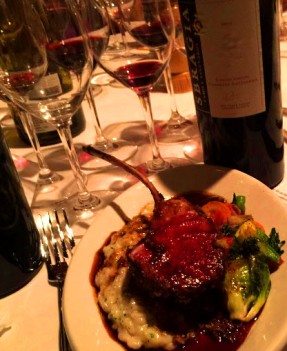 As if we hadn’t already eaten what felt like two complete meals, the final course appeared. Lamb lollipops with Manchego risotto were delivered to our seats to pair with two Cabs.

The first one we sipped alongside the lamb was the 2010 Sbragia Andolsen Vineyard Cabernet Sauvignon Dry Creek Valley. At this point, my husband had a sudden recollection that this may have been the wine we purchased on our visit so, after we got home, I pulled up our old records and sure enough, the 2007 Andolsen Vineyard Cab was in our cellar, though we consumed it several years ago.

When comparing the 92 Parker-rated 2010 Andolsen Vineyard against the other Cab, the 2011 Sbragia Monte Rosso Vineyard Cabernet Sauvignon Moon Mountain, I liked the Monte Rosso better than the leaner, more vegetal Andolsen. Admittedly, I am a fan of Monte Rosso fruit and despite 2011 being a tough year, this Cab persevered with predominant black fruit balanced out by green herbs and spice and a plush finish. I could only imagine what the Monte Rosso Cab from the heralded 2012 vintage might taste like, so we ordered a bottle to check it out!

All of the wines we tasted are an incredible value. While event pricing for the wines ranged from the mid $20s to low $30s, you can still likely find them for not much more. For additional information on Sbragia, Cafe Maxx and Wine Watch visit the following web sites:

← Savoring Spanish Wines at SAVBOR
Blinded by the Banks of Bordeaux →

Starting off the week with a solid #foodfriendly wine that goes with any meal, whether #takeout or your own menu. I paired it with my knock-off #pfchang lettuce wrap recipe! #shelterinplace #rioja #foodandwine #pairingwine #spanishwines #mondaynight
Celebrated #nationalpinotgrigioday with this selection. Good structure, with lots of peach and pear notes and a creamy texture. From the same producer as famed Santa Margherita, but a much better value. #italianwines #pinotgrigio #whitewine
Giving wine some #love on #cincodemayo in the #pacificnorthwest. #quarantinelife #aglianico #sonomavalleywine #shelterinplace
On another #stayhome #staysafe evening, we are even keeping our #winedrinking local with a great bottle of #washingtonstatewine! #merlot #wastate #wawine #winedown #mondaynight #staystrong #staypositive
What are you drinking this weekend? We opened this Napa Valley Gamay Noir last night, and it was the first time I've tried this varietal. Loved it, as you can tell by the empty bottle 😂 Beautiful, bright fruit, and good acidity so it even paired well with our chili! #napavalley #gamaynoir #weekendwine #drinkingathome #whatsinmyglass #virtualwinetasting #winedrinking
Paying homage to #wawinemonth with a #merlot from @lovethatredwinery. Drinking wine in Washington State is highly recommended! #washingtonstatewine #wawine #washingtonstate #winelabel #winedrinking #columbiavalley #saturdaynight #weekendwine