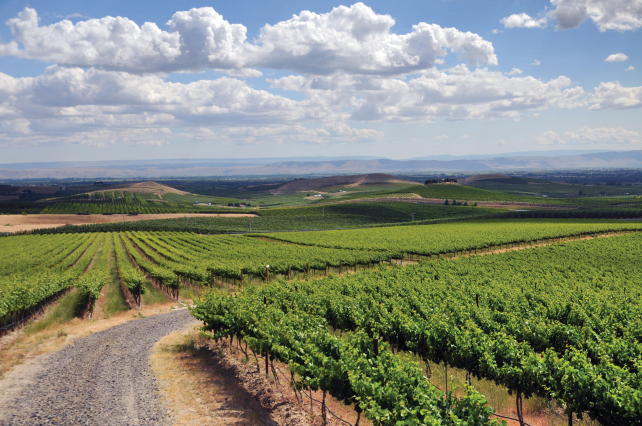 Yakima Valley, a rich agricultural epicenter, is where you can truly experience farm to bottle at its best. Boasting more than 13,000 acres of vineyards, it is a diverse AVA that offers everything from the small, local family winery to the large-production winery with national distribution, and to everything else in between. 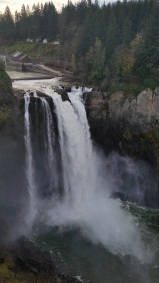 What you Need to Know

Getting to Yakima—located in the south central part of Washington—from Seattle takes a little over two hours on I-90 east, which takes you through Snoqualmie falls (as pictured). This is a beautiful site for taking a short break and getting some snapshots of the views before heading toward the northeastern side of Yakima.

The Yakima AVA, the largest in the state, is a sub-appellation of the larger Columbia Valley and is the first AVA established within Washington, where it gained recognition in 1983. Heavily influenced by the Missoula floods that occurred at the end of the ice age, the Yakima AVA has soil rich with sedimentary material topped with many layers of fine soil conducive for easy drainage. What does this mean for grapes? Ultimately the roots have to work hard to dig deep for water and, as they say, no pain no gain, right? In the wine world this holds true in that the more the vines struggle for water, the higher the quality of grapes.

Yakima has four main wine communities as shown in the map below: Yakima, Rattlesnake Hills, Prosser, and Red Mountain. (Click here to view map in larger scale.) Because of its size, both from a geographic and winery standpoint, we truly needed all of four days, if not more, to get acquainted with Yakima.

We started our tour in downtown Yakima, staying at the relatively new Hilton Garden Inn. This is an ideal base for exploring the small downtown hub that is surrounded by rural sprawl dotted with vineyards, wineries and other crops that make up the Yakima Wine Community. Produce is fresh and vibrant, and I am still marveling over the meaty mushrooms and bright, crisp greens that are so easy to come by (including at the Hilton’s breakfast buffet). And, then, of course, there is the wine!

Where to Taste: Yakima has close to a dozen wineries and tasting rooms. We included Owen Roe, Treveri Cellars and Gilbert Cellars in our one-day tour. If you visit downtown Yakima on the first Friday of the month, several of the tasting rooms stay open later and have live music.

Where to Stay: The Hilton Garden Inn in downtown Yakima is a mid-rise hotel with an outstanding breakfast buffet that offers made-to-order omelettes.

Where to Eat: Cowiche Canyon is the “it” spot in downtown Yakima. Carnivores and vegetarians alike will be satisfied at this beautiful farm-to-table restaurant, which also has a great wine list. Gasperetti’s is a Yakima locals’ favorite serving delicious pastas, meat and seafood. We took a bottle from our day’s tasting for a $15 corkage fee.

The Rattlesnake Hills sub-AVA is about a 20-minute drive south of downtown Yakima in the town of Zillah. Home to many small, family-owned wineries with small production, Rattlesnake Hills has elevations ranging from 850 feet to 3,085 feet, making it the highest point in the Yakima Valley AVA. It is named for its location on the Rattlesnake Hills slopes, which serve as a ridgeline that shields grapevines in the Yakima AVA from the freezing polar air sweeping in from Canada. Most of the tasting rooms are located on estate vineyards where the snow-capped peaks of Mount Adams and Mount Rainier can be viewed.

Where to Taste: There are more than 20 wineries in Rattlesnake Hills and, in our one-day tour, we visited Portteus, Two Mountain, VanArnam, and J Bell Cellars.

Where to Stay: The Hilton Garden Inn in downtown Yakima also serves as a convenient base for visiting Rattlesnake Hills.

Where to Eat: Pack a picnic lunch to take with you when visiting Rattlesnake Hills, then have dinner in downtown Yakima.

A small farming community, Prosser is about 40 minutes from Yakima. Unlike Yakima and Rattlesnake Hills, Prosser is not an actual AVA but is adjacent to the Horse Heaven Hills AVA, which is one of the newest in Washington and one that is becoming one of the most acclaimed in the state. Given its proximity to Horse Heaven Hills, Prosser is a great location for visiting wineries that produce wines from this spectacular AVA, among other quality vineyards as well.

Where to Taste: The Vintners Village offers a cluster of wineries within close proximity to each other, where we visited Airfield Estates and Martinez & Martinez. We would have visited Kestrel and Alexandria Nicole had we not already gone to their tasting rooms in Woodinville. Lots of people recommended the Walter Clore Center but we ran out of time.

Where to Stay: You can make Prosser a day trip and head east to the Tri-Cities area and stay at the Homewood Suites in Richland, which is about a half hour drive. It’s a brand new property on the river and is beautiful. We wish we had done that rather than stay at the Best Western in Prosser, which is no more than a roadside motel.

Where to Eat: Have lunch or an early dinner at Wine O’Clock Wine Bar, which is attached to the Bunnell Family Cellar. It has great flatbreads and a grilled Caesar salad, and you can enjoy a wine flight with your meal.

Red Mountain is the smallest grape growing region in Washington, but it is also heralded as producing some of the best wines in the state, with a growing list of 90+ point wines. The southwest slope of the Red Mountain AVA provides the vineyards in the region with a directional aspect to the sun that is ideal for prolonged sunlight exposure, making it the warmest AVA. These highly desirable conditions allow for a ripeness in tannins, which is a primary characteristic of Red Mountain fruit.

Where to Taste: Hightower, Fidelitas, Frichette and Col Solare are all great stops, each having its own unique personality.

Where to Stay: Homewood Suites in Richland. As previously mentioned, this is a new property and it is unlike any Homewood that I have stayed at in the past. Ask for a riverfront room to take in the beautiful views of the Columbia River and take advantage of the trail that runs along the riverbank.

Where to Eat: Anthony’s and LU LU Craft Bar + Kitchen are both riverfront restaurants just minutes away from the Homewood with great views. Both have brisk dinner business and Anthony’s has a great happy hour and Sunday brunch.

For winery reviews of those mentioned in this post, visit Spotlight on Yakima Wineries.

← Wining About in Woodinville, WA
Spotlight on Yakima Wineries →